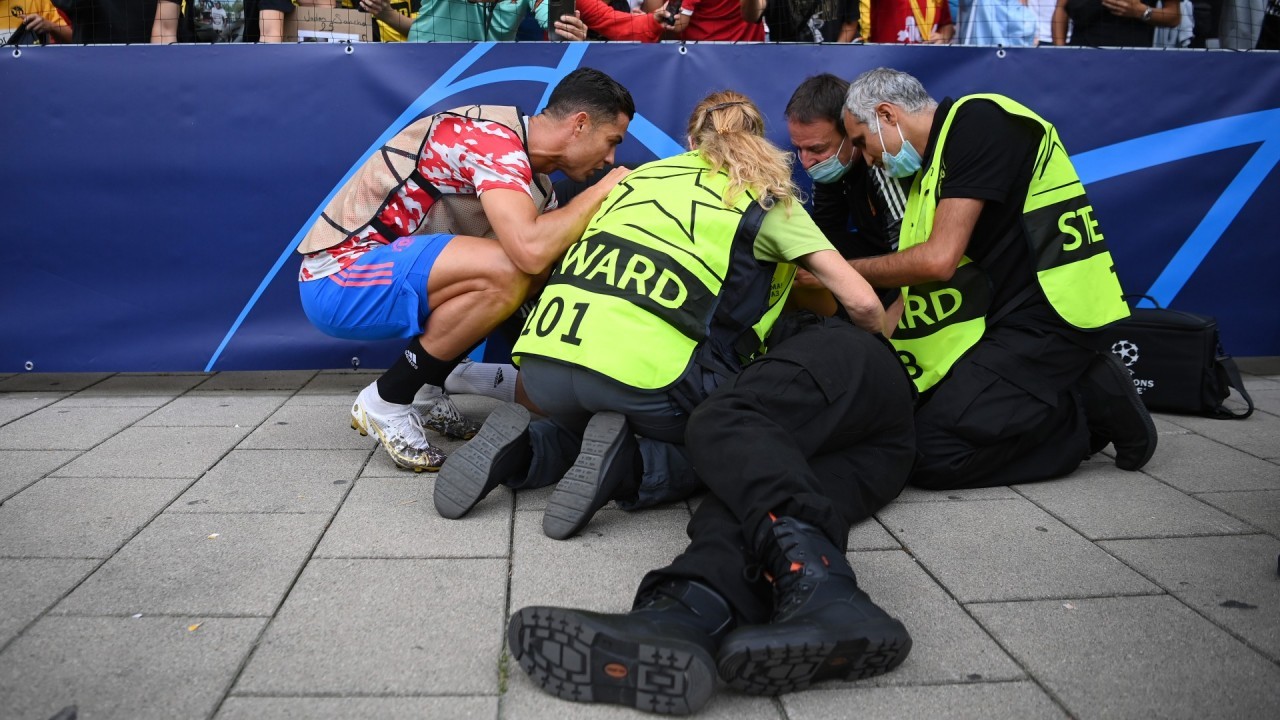 Cristiano Ronaldo gifted his Manchester United shirt to a Young Boys steward after knocking her over with a stray warm-up shot on Tuesday evening.

Ronaldo made his second Champions League debut for United at the Wankdorf Stadium, having re-signed for the club from Juventus in a £20 million ($28m) deal during the summer transfer window.

The 36-year-old marked the occasion with a goal, but was ultimately powerless to prevent the Red Devils from slumping to a 2-1 defeat, and was also involved in a bizarre incident just before the game that saw a steward knocked to the ground.

Ronaldo limbered up for the contest by taking a few shots at goal, but miscued one of his efforts horribly, and the ball ended up striking the steward in question with considerable force behind the touchline.

She was laid out flat on the floor to begin with and was checked over by medical staff and a number of fellow stewards before returning to her feet, with Ronaldo also going over to check on her wellbeing.

After the match had finished, instead of swapping shirts with a Young Boys player, the five-time Ballon d'Or sought out the steward to present her with the jersey as a special keepsake, and she expressed her delight over the gesture by making a heart shape with her hands as the striker headed away from the pitch.

United looked to be well on their way to victory when Ronaldo opened the scoring with just 13 minutes on the clock against Young Boys, as he produced a composed finish at the back post after latching onto a superb outside-of-the-foot pass from fellow Portuguese Bruno Fernandes.

However, the game turned when Aaron Wan-Bissaka was shown a red card for a rash challenge shortly before half-time, and the hosts eventually levelled proceedings via a Moumi Ngamaleu goal just after the hour mark.

Young Boys continued to pile on the pressure thereafter, with the Red Devils stubborn resistance finally broken deep into stoppage time as Jesse Lingard's loose back pass landed perfectly at Jordan Siebatcheu's feet, and the United States international subsequently slid the ball past David de Gea to give the Swiss outfit a memorable victory.

Ronaldo and Co will have to dust themselves off quickly ahead of a Premier League meeting with West Ham on Sunday, which comes just three days before United are due to face the Hammers again in the third round of the Carabao Cup.