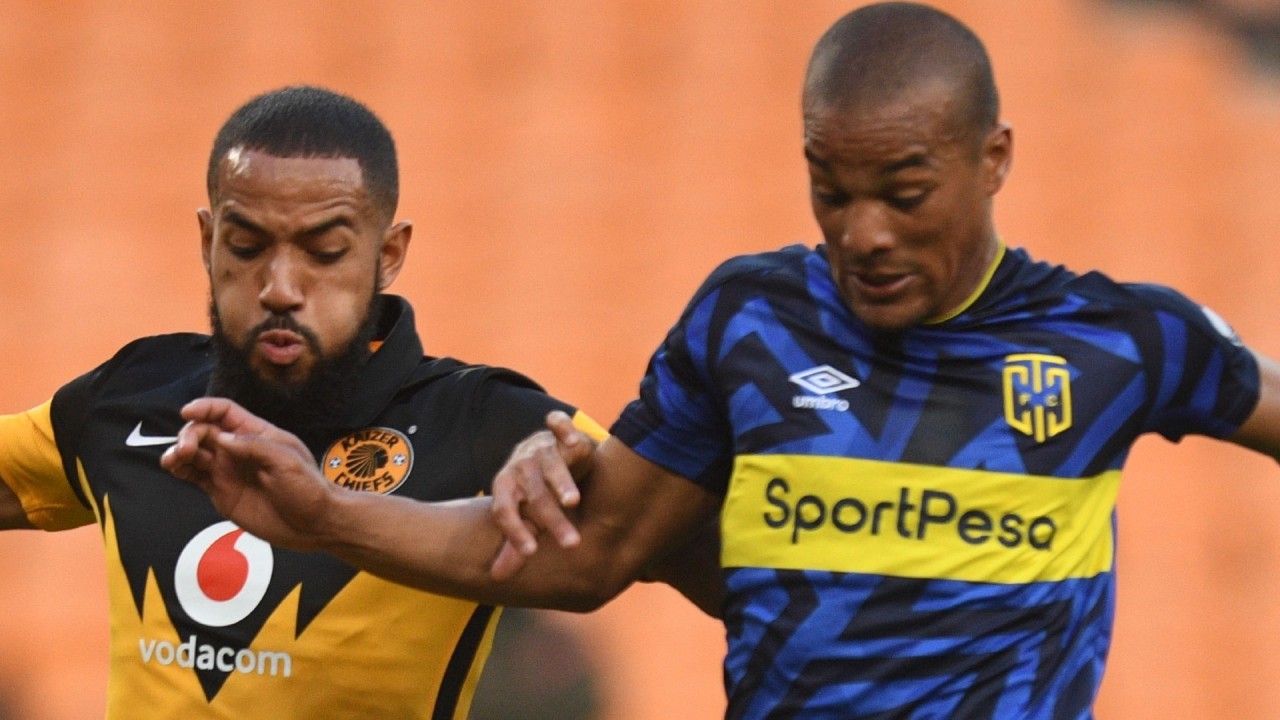 Amakhosi were hoping to move into the half of the league standings, but they succumbed to a defeat to the Mother City side

Cape Town City claimed their maiden win over Kaizer Chiefs since January 2019 when they recorded a 1-0 victory against the Soweto giants in a PSL match at FNB Stadium on Wednesday evening.

Two goals from Tashreeq Morris and Bradley Ralani inspired the Citizens to a victory, while Kearyn Baccus' second-half goal proved to be a mere consolation for Amakhosi.

Coach Gavin Hunt named an unchanged team with Lebogang Manyama, who netted in Chiefs' last game against Baroka, keeping his place in the starting line-up.

On the other hand, the Citizens were determined to win two matches in a row in the league for the first time since January 2021 having thrashed SuperSport United 3-0 on April 10.

Mpho Makola was rewarded with a starting berth by coach Jan Olde Riekerink after the former Orlando Pirates playmaker netted against SuperSport having come on as a substitute.

The Citizens pressed Amakhosi in the opening proceedings and Morris had two good chances, but he was denied by goalkeeper Itumeleng Khune.

Before the City centre forward ballooned his effort over the crossbar from inside the box after Chiefs had failed to clear Terrence Mashego's well-taken corner-kick.

Morris did make amends for failing to convert his two chances as he hit the back of the net when he turned home Mashego's cross to hand City a 1-0 lead in the 22nd minute.

It was nearly 2-0 to City, but Khune reacted quickly and snatched the ball before it could cross the goal-line after the Bafana Bafana international had denied Fagrie Lakay from close range.

Chiefs did have a rare chance just before half-time when Siyabonga Ngezana's acrobatic effort was finger-tipped over the crossbar by keeper Peter Leeuwenburgh and the score was 1-0 to City at the interval.

Baccus was introduced by Hunt prior to the start of the second-half as the hosts looked to take control of the match and push for the equalising goal.

However, Chiefs conceded again eight minutes before the hour-mark when Ralani beat Khune with a deflected shot to make it 2-0 to City with Lakay grabbing the assist.

The Citizens then sat back and they allowed Amakhosi to dominate the game and Samir Nurkovic's effort was cleared from the goal-line by Tariq Fielies with Leeuwenburgh well-beaten.

The hosts did pull one back in the 67th minute when Baccus headed home Ngezana's well-taken cross to make it 2-1 and the Soweto giants pushed for the equalising goal.

City were under siege in the closing stages as Ngezana hit the side-netting and Leeuwenburgh produced a brilliant diving save to deny Njabulo Blom.

The visitors then stood firm at the back and ultimately, the match ended in a 2-1 victory in favour of City, who remained seventh on the league standings and they will face Tshakhuma Tsha Madzivhandila on Saturday.

While Chiefs remained 10th on the standings ahead of their titanic encounter against Mamelodi Sundowns on Sunday.